Arthur was born in Kuala Lumpur, Malaysia, the only child of Scottish parents who had moved to Malaysia after WW 1 to manage a rubber plantation. At the age of seven he travelled to Glasgow to live with his grandmother. He was a boarder at Morrison’s Academy in Crieff and at age 17 he attended Glasgow University to study medicine. He received two Hunter Medals for Distinction in Anatomy and graduated with an MBCHB in 1949.

In 1942 his father was incarcerated in Changi Jail, Singapore during the invasion of the Malay Peninsula by the Japanese in WW 11. His mother was on the last ship out of Singapore which was bombed during the passage across the Indian Ocean.  Arthur did not see his father again until he was 20 years old.

After graduating he was drafted into the British Army and served as a Captain and Acting Major in Egypt and East Africa in the Royal Army Medical Corp. Whilst there he took part in the first blood transfusion of a Rhesus negative baby in East Africa. On returning to the UK he gained his Edinburgh membership for the Royal College of Physicians. 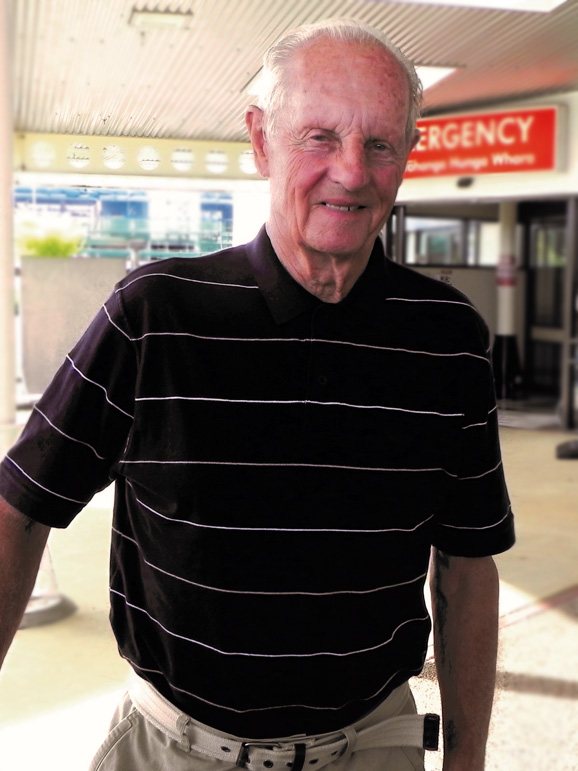 He took up a position at Leicester Royal Infirmary where he met Norah, a nursing Sister. Arthur and Norah married in January 1957 and shortly after Arthur was offered a position in Taumarunui, New Zealand. Arthur told Norah that this would be a good post as it was in a town that had golf course, close to a ski field and a lake. On the seven-week voyage through the Panama Canal Arthur was asked to treat Sir Antony Eden, the retiring prime minster of UK.

Arthur was a consultant physician at the Taumaranui Hospital and doctor to the Justice Department, Police and Prisons. During their busy time in Taumaranui they had three children, Duncan, Iain and Sarah.

In 1966 the family moved to Tauranga and he became a physician to the Tauranga Hospital. He had a varied and interesting career initiating the first clinics for patients with diabetes; physician for the elderly; teaching St John Ambulance members; working for the cremations service and Office of the Coroner; initiating the Medical Library; and training and mentoring countless house officers, some of whom are consultants at Tauranga hospital today. He specialised in Haematology gaining an International Fellowship of the Royal College of Haematology. He was also Deputy Medical Superintendent and the first Medical Advisor. After his retirement he was appointed Emeritus Physician.

One of his highlights as physician at the hospital was his appointment as Physician to Princess Diana when she visited the Bay. The family story goes that Arthur held his stethoscope in his hand all day so that it would be warm to place on the royal chest, but Princess Diana didn’t even cough!

Arthur and Norah have both contributed significantly to the Tauranga community. Arthur was honoured by the Rotary Club of Tauranga with a Paul Harris Fellow. Norah, a Senior Social Worker, gained a QSM for her services to the community.

Arthur was passionate about golf, skiing and sailing. He enjoyed golf with his colleagues like fellow Scot Dr Eric Hutcheson and played his last game of golf at age 90.

Arthur and Norah’s passion for community and healthcare has rubbed off on the family who have all worked for Tauranga hospital over the years. Iain is now a Consultant Anaesthetist in Canada, Duncan a Professor of Physiotherapy and Programme Leader Doctor Health Sciences at Auckland University of Technology and Sarah (Davey), a lawyer by training, the lead for Innovation and Improvement at BOPDHB.  Arthur dearly loved being involved in the lives of his eight grandchildren one of whom has recently graduated as the fifth Doctor Reid.

Arthur will be remembered with great fondness by all who knew him.